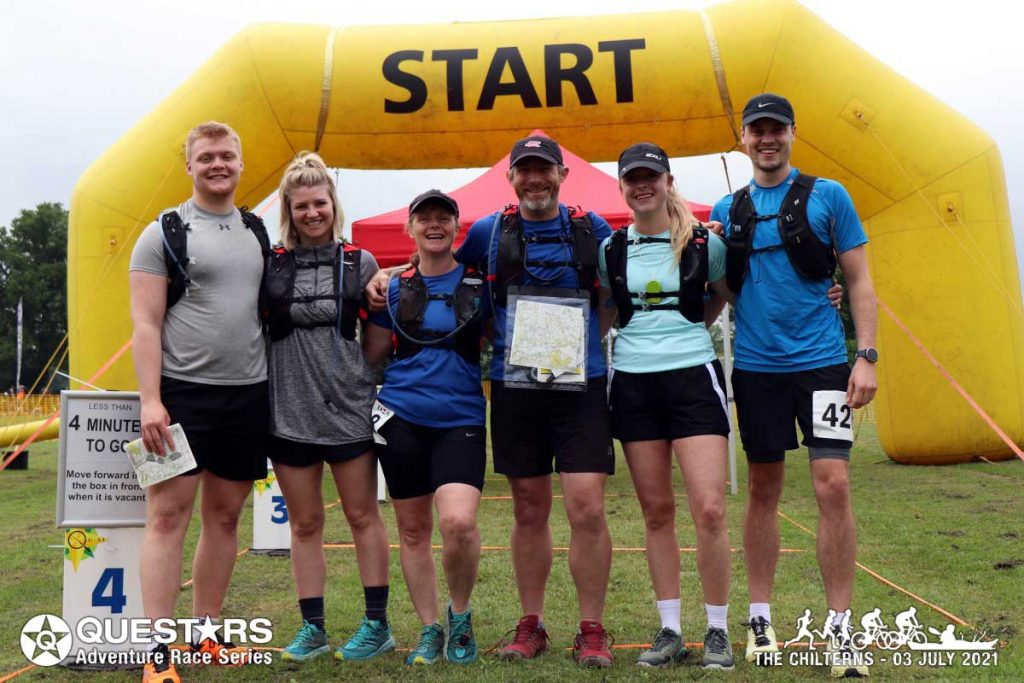 This week we are recalling the 2021 Questars Adventure Series one race at a time. And we’ll be revealing the series scores and positions after each race. This will culminate with the announcement of the 2021 Series Champions at the end of the week.

Today, we take a look back at the second race in the series. This saw Questars use a new venue – one that we haven’t used before – in the Chilterns. Situated in the heart of the Chiltern Hills, and surrounded on all sides by a patchwork of woodland, participant’s did not have to run or cycle very far from the event base before they got into the wonderful countryside that characterises the area.

Conditions were fairly benign on race day after the early morning mist and dew had lifted. But a sustained period of unseasonably wet weather in the weeks preceding the event had softened the ground and made the mud slippery in places (rather than baked hard like it normally is at the beginning of July).

This was most notably the case in the woods where the ground hadn’t had a chance to dry out at all. It didn’t affect the mountain biking too much as this was largely on gravel tracks. But it did make the trail run hard work and slow the pace of the run down a bit.

Tom Hards was slightly quicker on the water than Rob, visiting all the kayak checkpoints in 49 mins 55 secs. Tom also visited the same number of checkpoints as Rob. But by dropping one of the mountain bike checkpoints and visiting one more checkpoint on the trail run instead, Tom finished second overall with a total of 895 pts in 5 hrs 52 mins.

Gary Davies scored a total of 880 pts in 5 hrs 54 mins to take third place overall. He dropped the same single mountain bike checkpoint as Tom to score 430 pts mountain biking. But Gary lost a lot of time finding his first trail run checkpoint (after transitioning from the mountain biking), which he was unable to claw back. This saw Gary score 285 pts on the trail run, 15 pts less than Tom Hards.

Helen Chapman scored 375 pts on the bike, 165 pts on the kayak and 315 pts on the run. A five point deduction for exceeding the 6 hour time limit by less than one minute did not detract from her incredible achievement. Finishing with a total of 850 pts, Helen was not only the highest scoring woman, but she finished in 5th place overall and scored 100 pts more than her closest rival!

That person was Carol Yarrow, who visited the same mountain bike and kayak checkpoints as Helen. But she took almost half an hour longer to do so. This meant Carol did not have the time to visit as many run checkpoints and she only scored 205 pts from the trail run. However, with over 15 mins left on the clock at the end of the race Carol might be wondering if she could have scored a few more points. Nevertheless Carol’s total of 745 pts was still good enough for her to be the second highest scoring woman overall.

One place behind Carol was Karen Jones who competed with husband and mixed team partner Andy Jones. Their total score of 725 pts saw Karen finish as the third highest scoring woman overall.

The highest score on the Trail Run was set by the Duo team of Robin Seddon and Arron Elderkin. They visited all run checkpoints apart from two outliers, giving them a trail run score of 345 pts (out of a possible 390 pts). Carl Silver was the second highest scorer on the trail run with 335 pts. He collected 900 pts in total. However, Carl was 5 mins late back and ended up finishing in 4th place overall on 875 pts.

Congratulations to everyone that took part in the 2021 Chilterns Adventure Race, and in particular the winners of each class who are listed below…

The scores from the 2021 Chilterns Adventure Race have been converted into series points, with the overall race winner Robert Smart receiving 1000 series points (see the full series scoring details here). Click on the button below to see the series scores and positions after this race.